Villa Rica's Response to the Violence 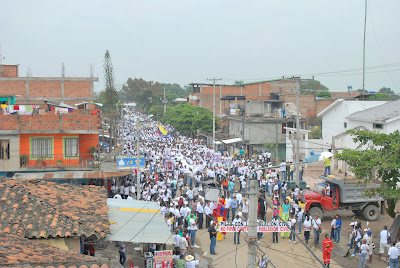 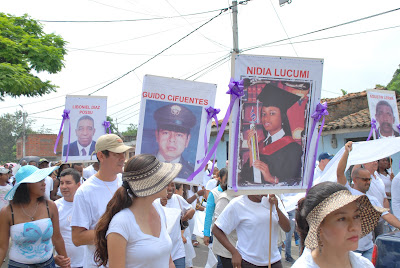 A funeral march of a young boy, who was a victim of the bombing. 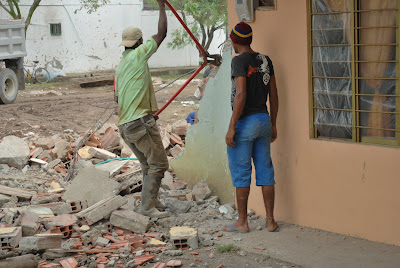 5 homes were completely destroyed in the attack. 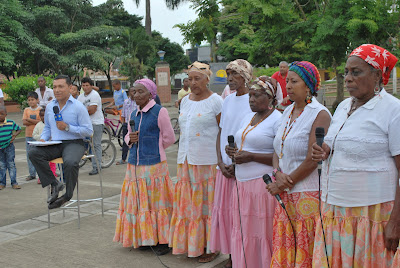 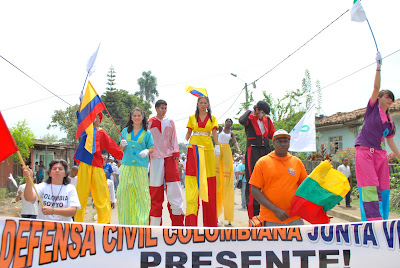 At the main park, there was a whole day of events, football matches, and community solidarity. It was beautiful to see.
Posted by Egalitarian Culture at 4:01 PM No comments:

Tune in to http://www.ustream.tv/channel/isbo-international-school-for-bottom-up-organizing to watch LIVE interviews from Villa Rica, Colombia.

Check out the archived videos too!
Posted by Egalitarian Culture at 3:40 PM No comments:

ISBO's Response to the Violent Attack on Villa Rica, Columbia

It is seldom that we ask our friends for financial help, but a community in southwestern Colombia, South America, where ISBO has organizers, is under attack as we write this letter. ISBO organizers (International School for Bottom-up Organizing) from around the world are going to Colombia to stand with the people and help them organize. Here is a first-hand statement made yesterday by one of our organizers who lives and organizes in the town of Villa Rica:

"Thursday morning we arrived in Villa Rica at 11:30 AM. The sirens that usually sound at 12:00 noon were going off at unusual times. No one understood why an hour later it sounded again. Then we heard the first explosion thirty seconds later. We weren't in the area of the blasts; those
that were near the area say that there was a truck parked in front of the police station. Two guys left running with guns. As they ran, they screamed: "run, there's a bomb!" and as soon as they said it there was a bomb, double impact, on the police station; another cylinder exploded on top of a house destroying everything nearby, and another fell in the main road in Villa Rica, instantly leaving five dead people. Two more died at the hospital. Two of the dead were children, one was only three years old. Thirty five people were injured. And all the community didn't know what to think; this had never happened before. This hurts us very much to see children and people from our community die this way. It was very painful to see pieces of people on the road. This is not just. Things at the moment are on lockdown. The authorities have said that this was an attack from the Farc. One of the reasons they suggest this is that the police in Villa Rica, a few months ago, confiscated a ton of weed and then a mule loaded with cocaine. They say these drugs belonged to the Farc, and in response they put the bomb. But this is very suspicious, because 24 hours before, there was a similar bomb attack in Tumaco, another Afro population town. At the moment there have been talks about rebuilding the station. People are very angry, because before they built the police station there was a school there, and the mayor of Villa Rica knocked the school down and put the police station there in the midst of people protesting. These are the consequences today, and they are talking about reconstructing the police station in the same place. People are not up to tolerating this."

From another Colombian organizer by phone:
"We have to be a bit careful about what I'm going to say, because we are in a public space and there can be spies everywhere. From the analysis that I have been able to do about this incident, what I think is happening is the fact that Piedad Cordoba, an Afro-descendent woman, was gaining too much power by negotiating with the Farc thru her humanitarian group. There has been talk of peace at recently through her: they were going to liberate twelve soldiers and police they held captive for ten years, and this was because of the negotiations of her group. A few days before this happened, the government was announcing that groups outside the government couldn't be negotiating. Maybe the government wanted to sabotage this process. The big question I asked myself when this happened was why was this attack on two Afro-colombian communities and not in Cali or Bogota? I think what they are trying to do is to discredit Piedad Cordoba and at the same time make a racial attack against the Afro-colombian communities. And I think that's because they saw that she was getting too much support in those communities. Villa Rica is in a very peaceful area. I think it's a whole strategy to make people scared and turn to the government to "defend" them, and at the same time because they don't want to end this war. That's just some initial observations of the whole thing. . . . My wife and I personally commit ourselves to go and be full-time organizers in Villa Rica for the next two months, even though we are expecting a baby. We will leave tomorrow morning."

These and other Colombian organizers had just returned from an intense, joyful, and very successful ISBO training session in Jamaica, along with organizers from Jamaica and England. We learned to make ethanol and solar panels as part of our goal of creating self-sustaining prototype communities based on the principle of egalitarianism. We strategized about how to develop a system of distributing our communal farm products based on the idea of each putting in what they can and taking out what they need. We searched our hearts and minds in the process of overcoming the obstacles of internalized racism and sexism, and we put into practice our most important organizing tools: visiting community members at their homes to invite their knowledge and participation in the process, and learning to facilitate meetings in which each person has equal voice and decisions are made by consensus. Love and unity between organizers from different countries grew as we became determined to build an international revolutionary movement to create a new world led by those most oppressed: the poorest and darkest among us, especially women.

WE ARE NOW FACING AN EMERGENCY SITUATION AND NEED YOUR HELP. Less than a
week after our comrades returned from the ISBO school they were confronted by this racist attack on their town. (See below for background on Villa Rica and what is happening to black people currently in Colombia.)

Because we just finished our school session, our finances have been depleted. We need your help to IMMEDIATELY replenish our resources so that we can provide necessary support to our Colombian comrades. We also need help in bringing international attention to these events and to the fascist conditions poor people face in Colombia, particularly if their skin is dark.

We are asking you to do two things:
1. Please go to our website (www.peoplesorganizing.org) and make a donation; no donation is too small!
2. Post this letter or your own summary on your Facebook page, send Tweets, send emails, and help us get the word out far and wide.

The struggle is international, and our comrades under attack need your help!

Background information:
Villa Rica is a town of about 15,000, nearly all of them African-descendants. In the 1840's, led by a maroon, the ancestors of today's residents rose up, killed the owner of the slave plantation on which they labored, took the land and began subsistence farming. In the 1940's, agribusiness came in and forced them off their land (only a few still retain their small fincas, or farms). Today the dusty town is surrounded by sugar cane grown for ethanol production. There is very high unemployment. Meanwhile, Colombia has one of the highest numbers of internally displaced people: 5,000,000 people, the vast majority of them Afro-descendants, have been forced off their ancestral, legally owned lands by paramilitaries who are clearing the way for multinational corporations to exploit the resources. People have crowded into the big cities after traumatic, violent experiences and face massive unemployment there. Scores of labor organizers have been assassinated in the past year or two. Colombia is described as having the worst humanitarian crisis in the Americas.

According to official figures, about 40% of Colombians are considered Afro-descendants. However, nearly all Colombians have ancestors who were African slaves!

ISBO has been training organizers in Colombia for four years. We believe we have a responsibility to stand in UNITY with our comrades and defend them and all of our right to live without fear of bullets and bombs. Please respond generously. Let the people of Colombia know that the world is watching, and cares about what is happening to them!


Thank you,
International Collective of ISBO

Photos from the Violent Attack on Villa Rica, Columbia 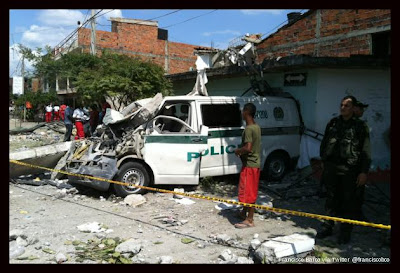 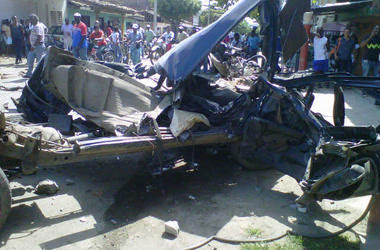 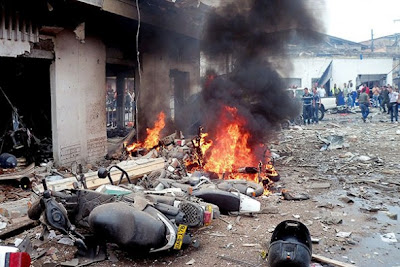 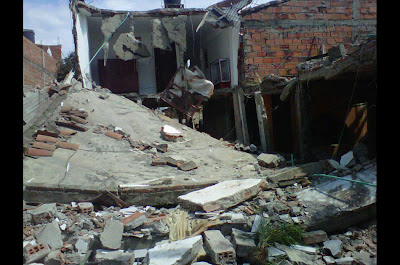 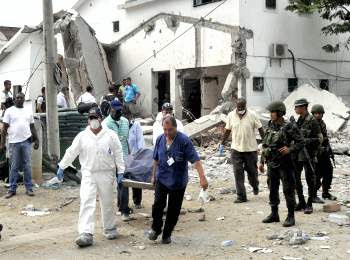